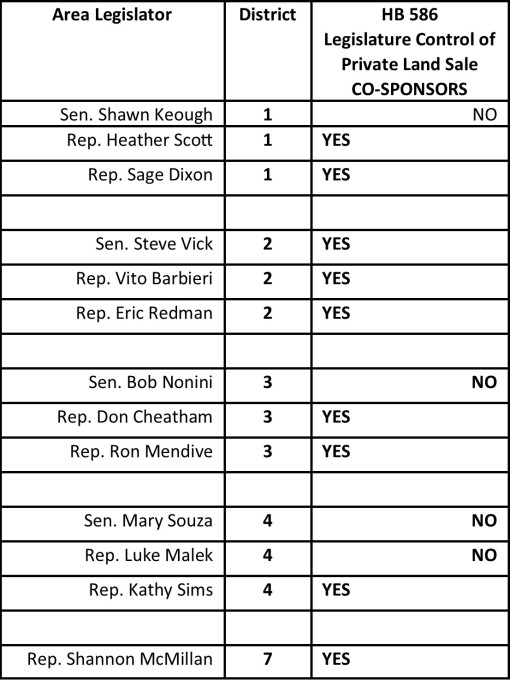 The issue of taking Federal Lands and transferring ownership to the states is one that certain politicians seem keen to capitalize on as a cure-all for various woes related to state sovereignty.  However, history and reality are significant barriers to many of the ideas related to such notions.  Many readers may have seen recent reports about the standoff in Oregon at the Malheur National Wildlife Refuge.  A man tragically lost his life in the conflict, and with the introduction of HB 586 this past legislative session, a certain faction in the Idaho legislature is seeking to bring this issue to our state.

In reality, Idaho cannot “take back” what was never ours.  The federal government has owned land in Idaho since the creation of the Oregon Territory, well before Idaho was even a state.  Idaho itself endorsed federal ownership in Article IX, Section 8 of the Idaho Constitution.  Despite the “take back our land” arguments of some, taking federal lands would be unprecedented, illegal and would upset what has been a balance in our state since 1890.

Admittedly, just because we have always done something, does not necessarily mean we should continue to do so.  Proponents for HB 586 argue that national public lands hurt the rights of Idahoans and limit the control Idahoans have over land management.  The facts do not bear this out.  Federal lands, unlike state, are subject to strict laws requiring public involvement and the accommodation of multiple uses of the land.  This bill, on the other hand, would impose strict limits on private citizens looking to sell their own land, essentially killing their personal property rights, because the state government would have control in approving, or disapproving, certain private property sales.  This approaches lunacy, not free market conservatism.

Additionally, this law would cost Idaho taxpayers.  The University of Idaho conducted a study that showed Idaho would lose money taking national public lands, because of increased management and firefighting costs.  According to the National Incident Command Center report on the 2015 fire season in Idaho, more than 800,000 acres were consumed by wildfires last year.  Thankfully, however, the state of Idaho only had to pay for the firefighting cost on about 103,000 acres, which were state-owned land.  For that, the firefighting bill was more than $60 million.

State lands are more actively managed than federal lands, and that doesn’t make them fire-proof, but it often means they are more defensible, and fires are less costly to suppress on state land because there is less fuel to allow a catastrophic burn.  Imagine if Idaho taxpayers had to foot the bill for all 800,000 acres that burned within our borders last year!

If proponents of “taking back our Federal lands” were successful, some would want Idaho to then sell the land to the highest bidding private entity, and Idahoans would forever lose recreational activities such as hunting, fishing, camping, hiking, rafting and more.  These activities are core to our identity as Idahoans.

We share in the frustration at the way the federal government is managing public lands now.  The Endangered Species Act, the National Environmental Policy Act and a raft of other federal land management policies tie the hands of our land management agencies and allow serial litigators to lock up these lands through the courts.  However, HB 586 misses the point entirely and would punish private citizens for the sins of radical conservationists and the federal government.

In summary, the idea of taking over federal land appeals to many conservatives on a basic level.  However, a deeper analysis shows that Idaho has never owned those lands, and taking them would be fiscally irresponsible and bad practical policy.  HB 586 couldn’t be more misguided or less conservative, and is completely the opposite of private property rights.