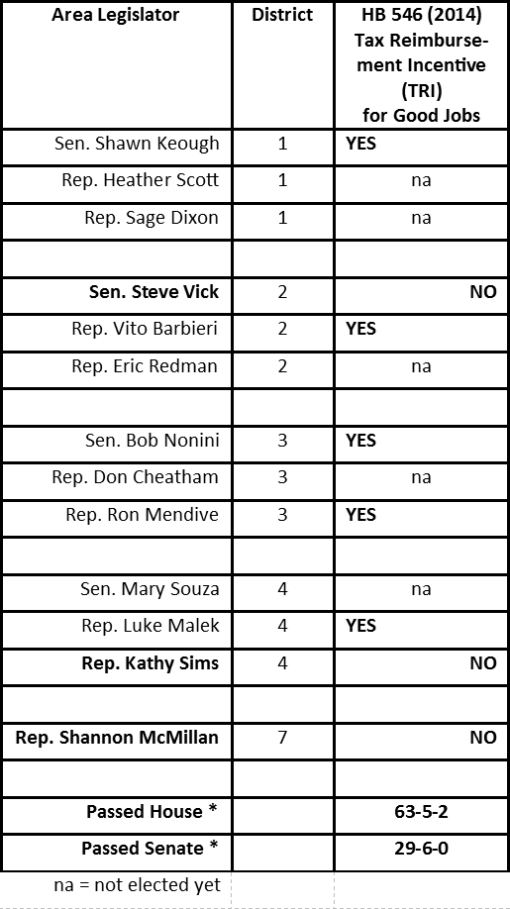 As conservatives, we know that government doesn’t create jobs, but it can create a favorable (or unfavorable) environment for businesses to grow and succeed.  We also know that states compete against each other for businesses and jobs, using every tool at their disposal.  A fundamental question is should Idaho compete in this marketplace, or sit on the sidelines?

Tax incentives are a reality in our economic environment.  They exist at every level of American government with varying levels of success.  Making a broad judgment about tax incentives based on a general “government is good/bad” ideology is easy, but ultimately unhelpful and overly simplistic.  It is far more constructive to judge the practical effects and actual results of tax incentives.  One such incentive is the Tax Reimbursement Incentive (TRI) which was passed overwhelmingly by the 2014 Idaho Legislature as HB 546.

The TRI reimburses job creators in Idaho who create 20 new full-time jobs in rural communities, or 50 new full-time jobs in urban communities, and which pay equal to or greater than the average county wage.  In Kootenai, this metric means new jobs paying over $16.60 per hour.  To qualify for the reimbursement, companies must provide a meaningful community contribution and prove longevity in Idaho.

But with NEW tax revenues of over $29 million for Kootenai, and over $14 million for Bonner, the return on investment is $7.50 in new tax revenue for every $1.00 spent.  Statewide, the TRI has already created over 3,000 new jobs in Idaho with an average wage of $44,800.  The total cost to the state is less than $32 million, but the projected NEW tax revenues exceed $131 million.  The TRI is projected to bring over $1.3 billion in new wages and over $428 million in new capital investment to Idaho.

With new revenue far exceeding initial expenditures, and the end result being well-paying jobs for Idahoans, why would any legislators vote against the TRI?  The answer seems to be because the Idaho Freedom Foundation lobbied against it.  Opponents say TRI forces companies who do not get the incentive to fight for employees against companies who are reimbursed for those employees, and they argue against TRI on the simplistic myth that all government involvement is bad.

The reality is any company willing to start a new project, hire new employees, and pay them well can compete on an even playing field for TRI, whether they be a small local company from Sandpoint or a large national competitor looking to start a plant in Pocatello.

Those who oppose TRI do so based on emotional arguments.  However, the facts show TRI is a remarkably successful development tool and has and will continue to provide good jobs, new investment, and higher tax revenue to Idaho.   Take a look below to see where your legislator stands on TRI.  Do they stand with the Freedom Foundation or with Idaho?