Everyone has been touched, in one way or another, by suicide. This is a health issue in Idaho, a mental health issue. Whether it is the immediate family, extended family or friends, co-workers or fellow students, the survivors experience a range of complex grief reactions including guilt, anger, abandonment, denial, helplessness and shock.

We need to remove the “stigma” of suicide and begin to talk about it and treat it as a preventable mental health issue. According to the Idaho Bureau of Vital Statistics, Idaho consistently ranks in the top 10 states with the highest suicide rates:

• In 2014, Idaho averaged over six deaths by suicide per week

For the most part, suicide prevention efforts in Idaho have been largely left up to nonprofit organizations such as United Way and larger Foundations such as the Albertson’s Foundation, and small, pass-through federal grants. The state of Idaho has historically had little involvement financially or programmatically.

In December of last year, the Idaho Health Quality Planning Commission approved a plan and path forward with a proposed budget. The push made during this legislative session is to fund the priorities of the plan. House Bill 566 is the result of this good work.

1) Office of Suicide Prevention within the Department of Health & Welfare

2) Training of middle and high school students over five years

4) A public awareness campaign: People simply do not know how to talk about suicide and prevention

SB 1326 amends IDH&W statute to clearly define the department’s role on suicide prevention and education, which was supported unanimously. However, HB 566, which actually funds the awareness and prevention activities, was supported by only a few area legislators as shown below left.

Suicide and non-fatal suicidal behavior are major public health problems across Idaho. But, suicide is preventable. When one feels hopeless or knows someone who is, reach out to the Idaho Suicide Prevention Hotline at 1.800.273.TALK (8255). 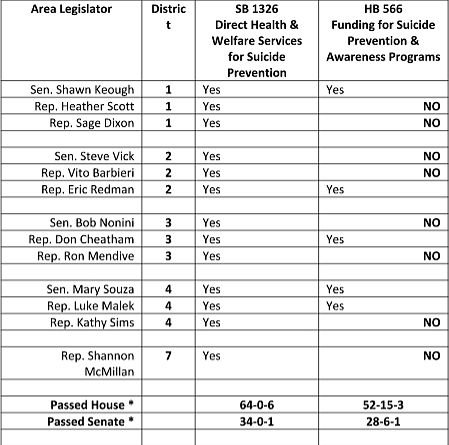