If you were injured in a car accident, would you ask the ambulance driver to take you to jail or to the hospital? Clearly, we would all choose medical attention. When mental illness is part of the crisis situation, however, the choices in Idaho haven’t been so clear-cut until recently.

In 2014, Idaho established its first mental health crisis center in Idaho Falls, followed in 2015 by one in Coeur d’Alene. The mental health crisis centers are short-term, voluntary facilities designed to help people who are currently in the middle of a mental health crisis, and possibly suffering from drug or alcohol abuse. In the past, when people were suffering through these episodes, they might have ended up in the emergency room, or worse, in jail, where they received little or no treatment. For different reasons, neither scenario is ideal, to say the least. The crisis centers give them a place to stop life from spiraling out of control and get professional help.

In just three months of operation, the Behavioral Health Crisis Center in Coeur d’Alene has seen 250 individuals, with law enforcement making more than 50 referrals from Kootenai, Bonner and Boundary counties. Most people stay an average of 12 hours until their behavior stabilizes — instead of going to jail or running up a $1,300 emergency room bill — and the vast majority go home with a detailed safety plan of what to do if their condition continues.

These crisis centers allow the first responders to spend more time doing what they are trained to do, and leave the mentally ill in the hands of mental health professionals. The bottom line is that we’re paying a little to save a lot, and these centers will save lives.

This year, the Legislature will consider funding two more mental health crisis centers, one each in Boise and Twin Falls, through HB 579, which is the entire mental health budget. The chart below shows how North Idaho legislators voted on previous bills, all of which passed overwhelmingly. Stay tuned to HB 579. 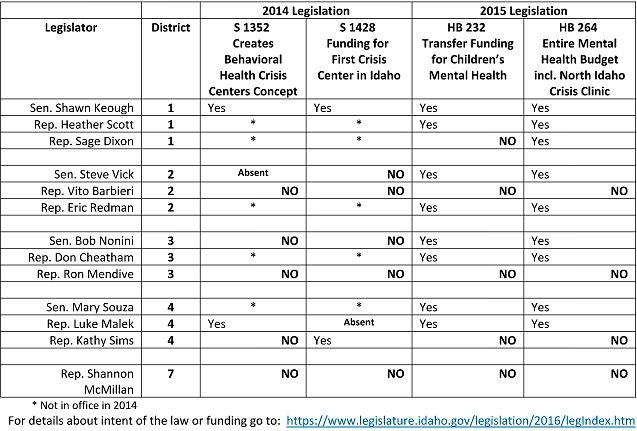