Remember when we wrote checks and our driver’s license number was required to verify that you were really you? It was easy to recall, since it happened to be your Social Security number.

It was a different time then and identity theft not so common. This column explores Idaho’s recent legislative responses concerning the federal requirements of the Department of Homeland Security under REAL ID.

The REAL ID Act of 2005 came from recommendations of the 9-11 Commission to make drivers’ licenses less susceptible to forgery, by requiring proof of U.S. residency. Beginning in 2008, the Act was to be phased in with full implementation scheduled for January 2016.

Idaho lawmakers passed legislation in 2008 to ban the state and its agencies from complying with this new federal requirement due to added expense and the perceived over-reach of government. When a similar bill re-surfaced last year, this ban was again reaffirmed unanimously by members of the legislature in House Bill 96.

If the new deadline is missed, Idahoans will be unable to use their driver’s license to board commercial flights, visit military bases, or enter nearly all federal facilities. A U.S. passport would be needed. For example, this would pose a significant problem for civilians working at the Idaho National Laboratory and other federal facilities such as military bases.

Fortunately, state lawmakers are now considering lifting the 2008 ban and complying with these tougher ID requirements. Last Tuesday, Feb. 15, new legislation in the form of House Bill 513 came out of the House State Affairs Committee with unanimous support.

The table below shows how our legislators voted on HB 96 from last year, banning implementation, but please stay tuned to see how they vote this year on House Bill 513, which would sign us up for REAL ID.

For details about intent of the law or funding: https://www.legislature.idaho.gov/legislation/2016/legIndex.htm 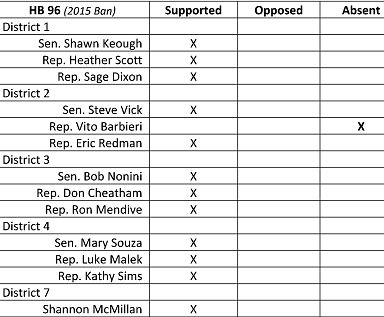