The MOST IMPORTANT ELECTION IS ON MAY 17 – NOT in November.  Make your vote count – it’s easy!

Voters may begin early voting at the Kootenai County Elections Office beginning May 2 through Friday, May 13.

OR, Go to your polling place on May 17, Election Day. 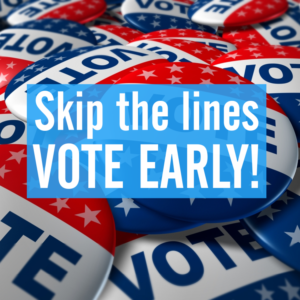 The important primary election is when each political party chooses their candidates for the November General Election.  The Republican Party’s Primary remains closed and only voters affiliated with the Republican Party will be allowed to vote the Republican Ballot. All registered voters are entitled to vote on non-partisan issues during the Primary Election like Judges and Supreme Court Judges.  However if you request an unaffiliated ballot, you can’t vote for any candidates other than judges this election. Successful candidates from the party primary elections and independent candidates will appear on the General Election Ballot.  And, since Idaho is predominantly a Republican State most candidates elected in the May primary become the designated representative, especially in North Idaho. Vote for Republicans who will place Principle over Politics and focus on issues that impact the lives of you, your family, and your community.

Other offices and issues, if any, will vary by County. Contact your County Clerk for more specific information.